Ann-Beth Freuchen (43) has been appointed Orkla Executive VP and CEO of the Orkla Confectionery & Snacks business area. She succeeds Christer B. Åberg (48), who is leaving to take up the post of CEO and President of the Hilding Anders Group. 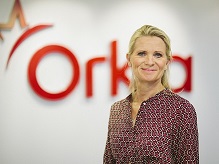 Ms Freuchen has been CEO of Orkla Confectionery & Snacks Norge since the company was established in April 2013 as a result of the merger of the Norwegian companies KiMs, Sætre and Nidar. Prior to that, she was CEO of KiMs Norge. She has been with Orkla since 1996 and also has experience as Marketing Director and Sales Director in the former Nidar.

"We are very glad that Ann-Beth has accepted the position as head of Orkla Confectionery & Snacks. She has long and solid experience in this area of Orkla and extensive brand expertise," says Orkla President and CEO Peter A. Ruzicka.

The formal change of leadership will take place on 1 July 2015.

Christer B. Åberg began work in his present position at Orkla on 1 August 2013, and has been a member of Orkla's Group Executive Board. He will be taking up the post of CEO and President of the Hilding Anders Group, which is Europe's leading supplier of beds and mattresses.

"Under Christer's leadership, Orkla Confectionery & Snacks has established larger, more competitive chocolate, biscuit and snacks companies in the Nordic region. We have also acquired NP Foods in Latvia with its strong local brands, and close to doubled our presence in the Baltics. I want to take this opportunity to thank Christer for his outstanding efforts at Orkla and wish him every success for the future," says Peter A. Ruzicka, President and CEO of Orkla ASA.

Work has begun on the process of finding Ann-Beth Freuchen's successor.

Orkla is a leading supplier of branded consumer goods and concept solutions to the grocery and out-of-home sectors in the Nordic and Baltic regions. The Group also holds good positions in certain product categories in India, the Czech Republic and Austria. Orkla is also a major supplier to the European bakery market. Orkla is listed on the Oslo Stock Exchange and its headquarters are in Oslo, Norway. As of 31 December 2014, the Group had a turnover of NOK 30 billion and 13,000 employees.